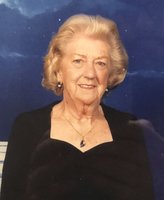 The Funeral Service for Ida Amanda Lundrigan (nee Johnson) will be held at St. John the Evangelist Anglican Church Main Street on Friday, August 9th at 10:30 a.m. with The Most Rev.  Percy Coffin and The Very Rev. Catherine Short officiating. Interment to follow at Mount Patricia Cemetery.

Ida was predeceased by her husband Arthur Raymond in 2000, her parents Olaf and Marion Johnson, her in-laws William J. and Naomi Lundrigan and son-in-law H. Reuben Cohen. She was the last surviving sibling of her Johnson family, predeceased by Hilma, Winnifred, Oscar, Olga, Alma, Herbert, Raymond, and Otto.

Her childhood was spent in Lomond, a place so dear to her heart, where many stories were created. Our mother then went on to graduate from the Royal Victoria Hospital in Montreal in 1942 and following this was nurse to Dr. T. T. Monahan in Corner Brook for many years.

Mom met the love of her life Arthur, and they were married in 1946 and had a wonderful life together. In their later years they truly enjoyed salmon fishing. She was passionately involved with The Girl Guides of Western Newfoundland, Western Memorial Hospital Foundation and Theatre Newfoundland and Labrador. During the Rotary Music Festival, one could always find Mom in the audience.

Mom, Nan or Nan-Nan was always very supportive and caring of her children, grandchildren, and great-grandchildren. She was our beacon.

A heartfelt thank you to the many caregivers and the “Gang at Marble Drive” who helped make her life so enjoyable these last few years. A special thank you to Dr. Robert O’Driscoll for his care and attention

As expressions of sympathy in lieu of flowers donations may be made to the Western Memorial Hospital Foundation.