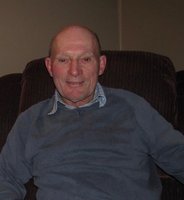 Austin Taylor Summerside, NL June 17, 1931 - June 21, 2020 He is now at rest. His work here is complete. And he done a mighty fine job for the eighty nine years that he was here. On Father’s Day, June 21st, 2020, in a bed surrounded by his children, grandchildren, and an abundance of love, Austin Taylor passed away peacefully in the Palliative Care Unit at Western Memorial Regional Hospital. Austin, affectionally referred to as ‘Aus’, was at his happiest when there was a job to be done. Always up early and dressed to tackle the day, there was no job too big or too small. But come noon, there’s only one place he could be found: His dinner table. Sat in front of a hot meal and a cup of tea, prepared by his one and only. Left to celebrate the life and love of Austin are: His adoring wife of 64 years, Doreen, and their children Mary Davis (George), Phyllis Delaney (Tony Sr.), Randy (Alma), Susan Butler (Wade), Janet (Fred Wheeler), Robert (Lori). Austin was an incredible grandfather to Tony Delaney Jr. (Heather), Tanya Gillingham (John Carter), Geoffrey Davis (Ashley), Tara (Brad Leaman) and Krista Butler (Mark Halfyard), Alecia (Jamie Park), Victoria, Rochelle (David Alexander), and Raquel (Tyler Hunt). Austin was a loving great-grandfather to Jack, Elle, Sam, Seth, Joshua, Matthew, and Breanna. Austin will be sadly missed by his siblings Jack, Doris, Clifton (Cynthia), Jim (Edna), Lillian, Wallace (Brenda); sister-in-law Shirley; and a numerous amount of his special nieces, nephews, friends, and extended family. Austin was kind, and quiet, and a man of few words, but his body held endless amounts of strength, love, and knowledge. During his long standing career, Austin worked on many sites and projects around our beautiful island, but his most important work was done on the Plant Hill; the place that he called home. It’s where he built a house for his family; it’s where his children were raised; it’s where he was most at peace. Austin could often be found riding around the Plant Hill on his quad, or gone ‘in over the hill’ for a ride. There was only two things that could keep Aus sitting still, and that was a good book or an episode of Jeopardy. Meeting Austin in Heaven are his parents, Rhoda and Freeman, brothers Alton, Fred, and Loren, sisters Olive and June, brothers-in-law Les, Gilbert, Clayton, and Llewellyn, and sisters-in-law Ella, Betty, and Ena. Austin's family would like to take this time to thank the WMRH nursing staff of 3B, 4AB, the Palliative Care Unit, as well as the Urology Department. Special thanks also goes to Dr. Griffin, Dr. Pasha, Dr. Khan, Dr. Brazil, Dr. Dunn, and Dr. Lafferty. The family are appreciative of the utmost respect that Austin was given during his care, and your kindness will never be forgotten. As per the requests of Austin, no visitation or service will be occurring. Cremation has taken place. In lieu of flowers, donations can be made to the Daffodil Place in his memory.