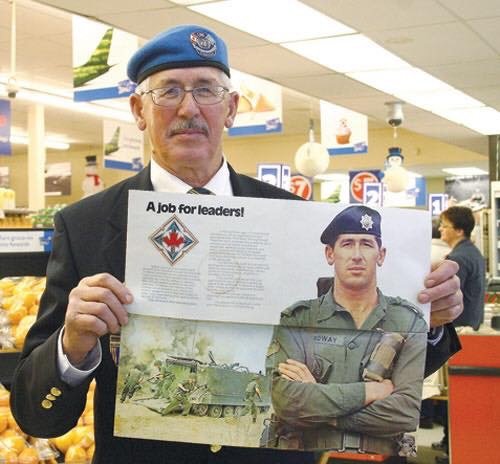 Ronald (Ron) Doane Pieroway, 80 of Pasadena, Newfoundland and Labrador, passed away peacefully on July 29, 2021, in the palliative care unit of the Western Long Term Care Home.

Ron was born in Mary’s Harbour, Labrador but spent most of his childhood years in the Bay St. George area (Gallants and Barachois Brook).  At just shy of 18, Ron joined the Canadian Armed Forces and he proudly served for 32 years, in the Black Watch, and then the Second Royal Canadian Regiment (RCR). He retired in 1990 after serving as Regular Support Staff to the Reserves at the Gallipoli Armories, Corner Brook. Ron was an avid recreational fisherman and hunter, who loved spending his time on the river and in the woods.

We, the family, would like to extend their gratitude to his personal support workers Brittany White and Catherine Harty who were a tremendous help in caring for Ron over the last 3 years. Our appreciation also goes out to the staff of Medicine (Floor 3) of Western Memorial Regional Hospital and the palliative care unit at the Western Long Term Care Home, who cared for Ron in the final weeks of his life.

Graveside service and burial for family and close friends will take place at the St. David’s Anglican Church Cemetery at 2:00pm on Thursday, August 5. An open house will follow at the Pasadena Lions Club starting at 3:00pm. Masks will be required. Fillatre’s Funeral Homes will be handling the funeral arrangements. No visitation will be held as per Ron’s wishes. In lieu of flowers, memorial donations may be made to Parkinson Canada or the Royal Canadian Legion Branch 68, Pasadena, NL via email transfer to rcl-branch-68@outlook.com.

The graveside service will be livestreamed through Fillatre Funeral Homes Ltd. on Facebook for those who would wish to view it.
https://www.facebook.com/FillatreFuneralHomes/about/?ref=page_internal

Services for Ronald Pieroway
There are no events scheduled. You can still show your support by sending flowers directly to the family, or planting a memorial tree in memory of Ronald Pieroway.
Visit the Tribute Store

Share Your Memory of
Ronald
Upload Your Memory View All Memories
Be the first to upload a memory!
Share A Memory
Send Flowers