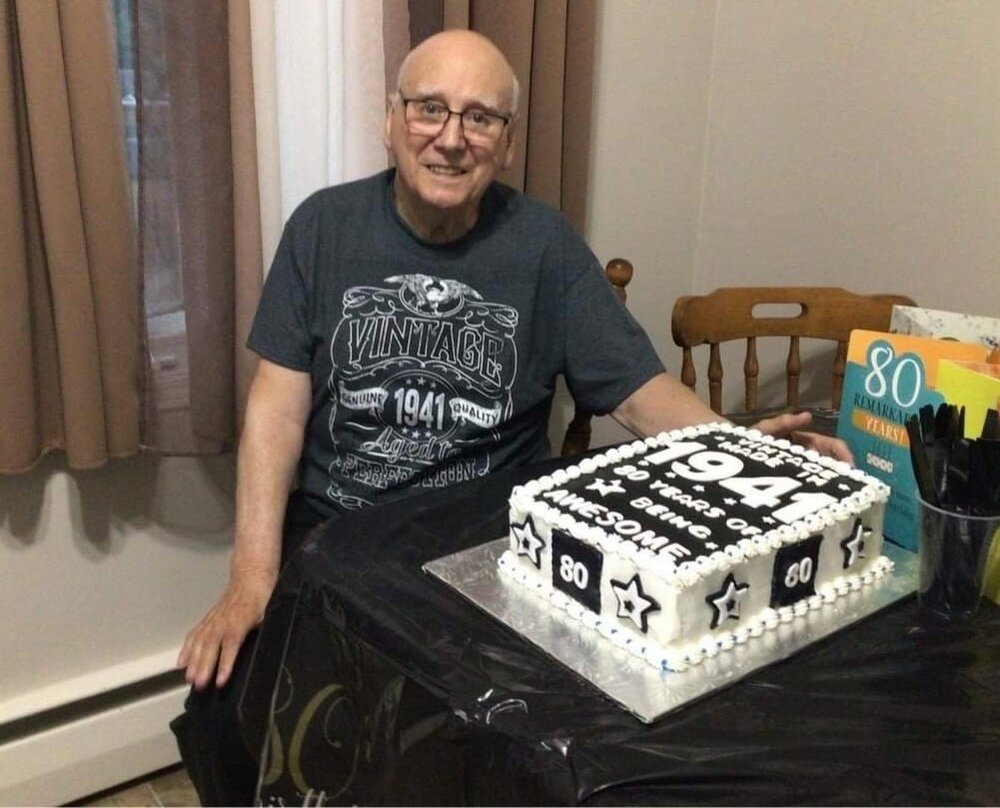 It is with much love and gratitude that we announce Dad’s peaceful passing at Sir Thomas Roddick Hospital on Saturday, April 16th in the presence of his loving sisters. As a family we are very saddened by dad’s passing, and we will miss him terribly, but we take great comfort in the fact that his body and gentle heart are now at rest with no more pain.

Left to mourn his loss are his daughter, Stephanie Neil (Perry) and his son, Dean Skinner (Beverly), along with his furry co-pilot, Hershey, who was dad’s constant companion and protector.  He will also be missed by his homecare worker, Leighann Bennett, whom dad came to love as a second daughter and who has become a very important part of our family. It was her care that allowed dad to remain in his home until he required hospitalization.

Dad was the second oldest of a large loving family. He will be greatly missed by his sisters: Loretta, Josephine (Fred), Kathleen (Ed), Marion (Al), Liz (Arthur), Rosetta (Gregg), Judy (Bernie) and Karen (Adrian), brothers: Kevin (Jean), Howard (Anne-Marie) and Jackie (Shelley).  He will also be missed by brothers-in-law, Jack (Teresa) McDonnell, Kevin (Trudy) McDonnell, Richard McDonnell and Kevin Hines, who was also one of dad’s closest friends. Dad will also be missed by many nieces and nephews and their children, along with many other extended family members and friends. Sharing our loss will be his special friends, George and Stanley Parsons and his lifelong Seal Rocks buddy, Bob Mercer.

He was predeceased by his wife Elaine, his parents: John and Evelyn Skinner, parents-in-law: Stephen and Zita McDonnell, sisters-in- law, Louise Hines and Phyllis McDonnell, along with brother-in-law Ed Brien and nephew Shawn Skinner.

As a family we would like to thank the nursing staff of medicine and surgery at Sir Thomas Roddick Hospital for your compassionate care during dad’s hospitalizations, and Dr. Krechi, Dr. Hough and NP Wendy Squires for your medical interventions on dad’s behalf. We would also like to thank NP Lori Chaffey, St. George’s Medical Clinic and Shauna Chaffey, Community Health Nurse for your continuous care of dad over the last couple of years. We would also like to thank the St. George’s Fire Dept. who came to dad’s rescue several times. As a community we are so fortunate to have these first responders in our community.

As per Dad’s wishes cremation has taken place. Dad loved animals and the family has chosen that in lieu of flowers, donations may be made by e-mail transfer to the Southwest Coast SPCA at swcspca@hotmail.com or to the family who will be forwarding donations to this organization in dad’s memory.

Look inside to read what others have shared
Family and friends are coming together online to create a special keepsake. Every memory left on the online obituary will be automatically included in this book.
View Tribute Book
Services for William Skinner
There are no events scheduled. You can still show your support by planting a tree in memory of William Skinner.
Plant a tree in memory of William

Share Your Memory of
William
Upload Your Memory View All Memories
Be the first to upload a memory!
Share A Memory
Plant a Tree