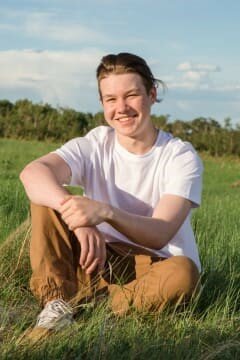 Please share a memory of Zachary to include in a keepsake book for family and friends.
View Tribute Book

It is with heavy hearts that we announce the passing of Zachary Dwayne Trimm (Zach). Zachary Trimm (Zach) was born in Corner Brook, Newfoundland on May 26, 2006 and has lived in Grande Prairie, Alberta since he was 3 months old. Zachary attended multiple schools in Grande Prairie including Parkside, Avondale and the Grande Prairie Composite High School, where he was currently completing Grade 10. Zach was a very energetic and social young man and some of his current passions included hockey and dirt biking. He experienced life to the fullest and his motto in life was ‘make a decision and never look back’. He played with Grande Prairie Minor Hockey for 6 years and 2 years ago discovered his love for dirt biking. Between ice surfaces, dirt trails and race tracks, his life was filled with much adventure and fun. Following a tragic dirt biking accident, Zach passed away at the Stollery Children’s Hospital on Wednesday, May 25th, 2022 at the age of 15 years and one day shy of his 16th birthday. He was surrounded by his dad, mom, sister, grandparents, uncles, aunts, cousins and a multitude of friends. He is survived by his mom (Kinza), dad (Dwayne), sister (Alexis), grandparents (Edward and Thelma Barney), uncle Murray (Susan), aunt Karen (Mark), aunt Kimberly (Stephen), uncle Gaius (Doreen), aunt Bonita (Cecil), aunt Lois (Gerard) and his cousins (MaKenzie, William, Mercedes, Jayden, Brea, Traci, Heather, Mika, Christopher, Matthew and Mark). He is pre-deceased by his grandparents (Algerman and Gladys Trimm). A visitation will be held on Tuesday, May 31st from 7-9:00 p.m. at the Gospel Hall in English Point, from where the funeral service will take place on Wednesday, June 1st at 2:00 p.m., followed by the  burial at the Gospel Hall Cemetery in Forteau.  Memorial donations can be made to the Grande Prairie Regional Hospital (gphospitalfoundation.ca) or the Stollery Children’s Hospital (stollerykids.com). Care entrusted to Fillatre's Funeral Home, L'Anse au Loup.

Share Your Memory of
Zachary
Upload Your Memory View All Memories
Be the first to upload a memory!
Share A Memory
Send Flowers
Plant a Tree