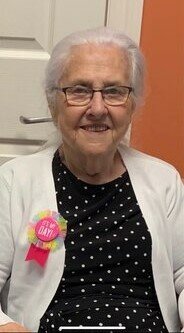 Please share a memory of Maria to include in a keepsake book for family and friends.
View Tribute Book

It is with sadness and yet with thanksgiving for a life well-serving to her Saviour that the family of the late Maria Ann Belben announce her passing at the Labrador South Health Centre - Long Term Care Facility on New Year's Day, 2023 at the age of 90. Maria leaves to mourn her children: Preston (Bernice), Dorothy Barney (Francis), Brenda Jarvis (Jim), John (Phyllis), Bert (Kim), Doreen Trimm (Gaius), Morenda French (Graham), Warrick (Nerissa), Zonya Hancock (Joe) and Terry as well as her sister: Maude Diamond and sister-in-law Gertrude Fowler. Her dearly loved 22 grandchildren, 23 great-grandchildren and 2 great-great-grandchildren and a large circle of nieces, nephews and friends. She was predeceased by her parents Preston and Susan Fowler, her dearly beloved husband of 49 years Josiah Belben, grandson Trevor Fowler and son-in-law Jim Hudson.

Maria (known as Aunt Mariah by most) was a faithful and loving wife, mother, grandmother, great-grandmother, great-great grandmother and friend. Raising 10 children on the remote coast of Labrador she was a hard worker, an amazing cook and baker and was quite skilled at making clothes for her children. She was as handy as any man around the house and would easily transition from cooking and cleaning to gardening and to painting or putting down baseboards or anything else she felt needed to be done. Even in her later years she would sneakily be at things she probably should not have been doing.

Visiting her house, the atmosphere was always peaceful and her Bible was always lodged in plain sight on her coffee table. Maria accepted the Lord Jesus Christ as her Saviour in 1957. In her words, she understood that she was a sinner and that the wages of sin is death; she realized that God was giving her a gift - in the person of His Son and accepted the gift.

Visitation will be held on Monday, January 2 at 7:00 p.m. at the Lanse-Au-Loup Gospel Hall. A funeral service will take place from the same location on Tuesday, January 3 at 2:00 p.m.

Look inside to read what others have shared
Family and friends are coming together online to create a special keepsake. Every memory left on the online obituary will be automatically included in this book.
View Tribute Book
Services for Maria Belben
There are no events scheduled. You can still show your support by sending flowers directly to the family, or planting a memorial tree in memory of Maria Belben.
Visit the Tribute Store

Share Your Memory of
Maria
Upload Your Memory View All Memories
Be the first to upload a memory!
Share A Memory
Send Flowers
Plant a Tree