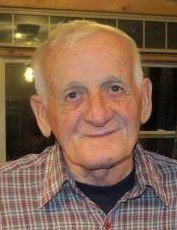 It is with heavy hearts that the family of the Late Gerald Blanchard announce his passing on Friday, October 18, 2019 at the Sir Thomas Roddick Hospital, Stephenville, NL at the age of 81 years.  He will be remembered and forever loved by his wife Debbie; sons:  Randy (Sheryl), Brendan (Amber); grandchildren:  Logan, Lacey, Charlee; sisters:  Jean Colombe, Marie Bennett; special niece Arlene (Cal) White as well as many nieces, nephews other family and friends.  He was pre-deceased by his parents Gertie & Fred Blanchard; brothers:  Eddy, Charlie, Arthur, Carroll, Augustus (Gus); sisters:  Agnes Blanchard, Hilda Marsh, Nellie Blanchard, Elizabeth (Betty) Smallwood and Hazel Farnell.  The family would like to express their sincere thanks to the doctors and nurses of the Medicine ward of the Sir Thomas Roddick Hospital and the staff of the Bay St. George Long Term Care Center.  Visitation will take place on Tuesday, October 22, 2019 between the hours of 2 – 4 & 7 – 9 p.m. from St. Joseph’s Parish, St. George’s, NL from where the Funeral Mass will be held on Wednesday, October 23, 2019 at 10 a.m. with Father Edmund Dantes officiating.  Inurnment will take place following the service in the Roman Catholic Cemetery, Shallop Cove, NL.  As expressions of sympathy in lieu of flowers donations may be made to the Southwest Coast SPCA in memory of Gerald to recognize and honour his love for animals.  Funeral arrangements have been entrusted to Fillatre’s Funeral Home, Stephenville Crossing, NL.

Share Your Memory of
Gerald
Upload Your Memory View All Memories
Be the first to upload a memory!
Share A Memory
Send Flowers