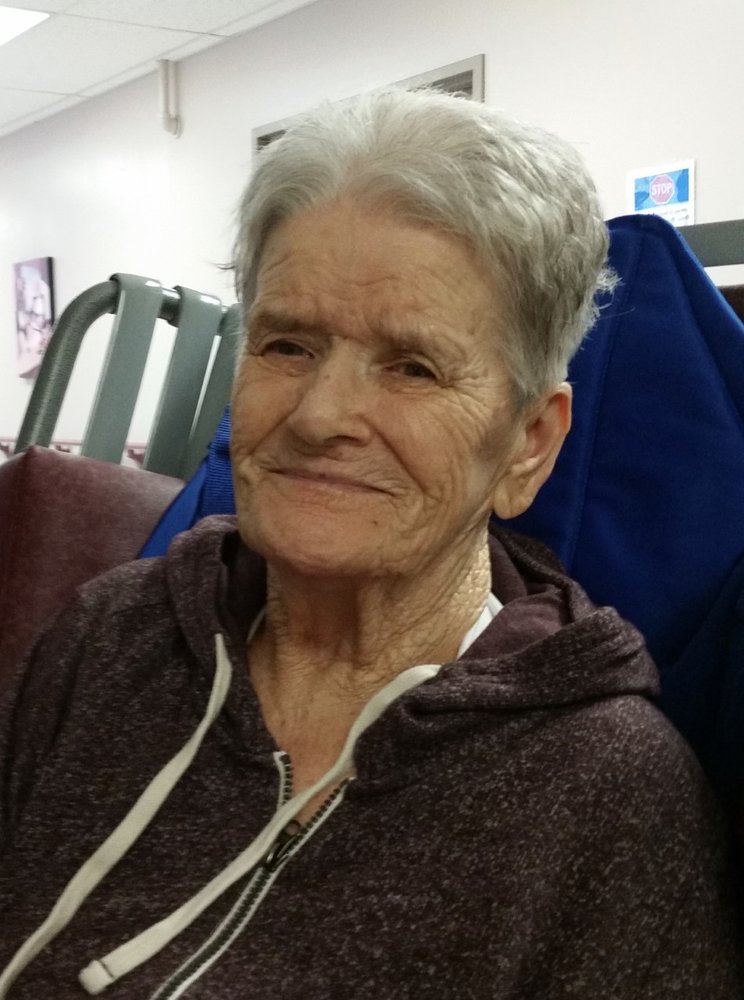 God saw you were getting tired, and a cure was not to be,

So he put his arms around you, and whispered, “Come to Me.”

It is with heavy hearts that the family of the Late Theresa Agnes (White, MacNeil) Messervey announce her passing at the Bay St. George Long Term Care Center, Stephenville Crossing, NL on December 3, 2019 at the age of 86 years.  She leaves to mourn with loving memories her children:  Kevin, Jim, Trish (Scott), Ken; grandchildren:  Jeffrey, Stephanie (Julien), Cheryl (Jeremy) (great-grandson Jaxon), Brittany, Frank and Brittany.  Stepchildren:  Jim (Debbie), Sandy, Sherry and their families.  She will be missed by her siblings:  Sadie, Vince (Sue);  brother-in-law Richard; sister-in-law Joan and many nieces, nephews, other family and friends considered family.  Theresa was predeceased by her husband Frank MacNeil (her children’s father) and husband Ray Messervey (stepchildren’s father).   She was also predeceased by her parents Bart & Christina White; sister Phyllis; brothers:  Pat, Gerard; sister-in-law Rita; brother-in-law Ron and stepdaughter Debbie.  Special thanks to our family and friends and compassionate staff who gave love to our mother as she journeyed though this life.  Visitation will take place at St. Joseph’s Parish, St. George’s, NL on Friday, December 6 2019 from 2 - 4 p.m. and 7 - 9 p.m.  where the funeral mass will be held on Saturday, December 7, 2019 at 10 a.m. with Father Edmund Dantes officiating.  Interment will take place in the Roman Catholic Cemetery, Shallop Cove, NL following the service.  As expressions of sympathy, in lieu of flowers, donations may be made in Theresa’s name to the Bay St. George Long Term Care Centre or Emile Benoit House in Stephenville Crossing where Theresa lived comfortably with the support and love of the caring staff, volunteers and residents over the years.  Funeral arrangements have been entrusted to Fillatre’s Funeral Home, Stephenville Crossing, NL.

Theresa left home and joined the Military (Royal Canadian Air Force) where she met and married her husband Frank MacNeil in Rivers, Manitoba on 19th May 1956.  Mom was honourably released from the Military on 7th of June 1956. They were posted to Baden Solingen, Germany and then back to Chatham, NB.  Their family had now grown by 4 children (Kevin, Jim, Trish and Ken).  While living in Chatham Frank was tragically killed by a drunk driver and died on 03rd January of 1966.

Theresa moved home to NL where her mom, dad and family supports were there to help as she raised her 4 kids.  She later met Ray (Cay) Messervey and they were married 15 March 1974.  He was a long liner fisherman.  He was tragically killed on 18 February 1984.  Theresa was 50 years old and widowed a second time.

Life was not always easy.  Being a widow twice and in & out of the workforce were just part of her journey.  Mom chose to stay in NL, on her own, despite the offers to come to Nova Scotia.  She would curse the Gulf of St. Lawrence and difficulties getting to see her kids and grandkids.

In mom’s mid 60’s she was diagnosed with mild cognitive impairment which was confirmed to have progressed to Alzheimer’s before she turned 70 years old. In June of 2004 mom moved into Emile Benoit House where we met Mary-Lou Russell Chipp.  M-L, who was very loving and supportive, is also a great advocate for her residents.  With the support of home care twice daily and the caring residents at Emile Benoit, mom was able to stay until May 2010.  At that time mom’s health had moved into the next phase where she needed full time care and a move to the Bay St. George Long Term Care Centre was necessary.  The staff at BSGLTCC were wonderful and welcoming and this helped greatly with mom’s transition.  Mom resided in Harmony Lane (North) & Memory Lane (Protective) over the years and had many roommates. Much love to the many wonderful people who cared for and loved mom.

Theresa was in the Military – Royal Canadian Air Force.  She also worked for Canada Post for many years and she worked for her brother-in-law, Ron Callahan for several years.  She was a member of the Royal Canadian Legion, St. George’s.  Theresa was a community minded lady, member of St. Joseph’s Parish and was also busy with the Ladies Guild, Catholic Women’s League and Women’s Institute just to name a few.

Mom loved her MOOSE!  She could be seen driving slowly down the highways or sideroads, eyes peeled looking for moose or caribou.  Many family and friends packed a lunch to join her on one of her moose runs!  Bingo… did she love her bingo.  Mom also enjoyed playing darts.  She loved to laugh and carry on even as she resided in BSGLTCC.

Love you mom, you will be missed!

When I come to the end of my journey, and I travel my last weary mile,

Just forget if you can, that I ever frowned, and remember only the smile.

Forget unkind words I have spoken; Remember some good I have done,

Forget that I ever had heartache, and remember I've had loads of fun.

Forget that I've stumbled and blundered, and sometimes fell by the way.

Remember I have fought some hard battles, and won, ere the close of the day.

Then forget to grieve for my going, I would not have you sad for a day.

Share Your Memory of
Theresa
Upload Your Memory View All Memories
Be the first to upload a memory!
Share A Memory
Send Flowers