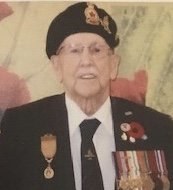 Robert Gordon (Bob) Grant It is with great sadness that the family of Robert (Bob) Grant announce his peaceful passing on Friday, May 22nd, 2020 at his residence, the Corner Brook Long Term Care Facility, after a brief illness. He was born in St. John’s, NL on June 22nd, 1919 and passed away one month shy of his 101st birthday. He was predeceased by his loving wife Anne in 2002. He is survived by his son Ian (Eleanor) of Brandon, MB., his granddaughter Lindsay (Tom) of Toronto, ON. and granddaughter Robyn (Robert) of Winnipeg, MB. He is also survived by many other relatives and friends whom he held close to his heart on this side of the ocean and in the United Kingdom. Dad was a proud member of the 166th Newfoundland Regiment, Royal Artillery, serving in England, North Africa and Italy during World War Two. He was a longtime member of the Royal Canadian Legion, Branch 13, since his return from the War. He was also a longtime member of the Masonic Order. Dad was a member of Lodge Lomond No. 32 in Corner Brook as well as Lodge Humber No. 1475 in Deer Lake. Dad was both a gentlemen and a gentle man. He will be missed by all who knew him. A private service and internment will be held. A Celebration of Life will be held at a later time when current public gathering restrictions are eased. A full obituary to follow. Dad, we will always love, honour, cherish and miss you. You led by example and you always truly represented the Grant Clan Motto: “Stand Fast”
To plant a tree in memory of Robert Grant, please visit Tribute Store
Services for Robert Grant
There are no events scheduled. You can still show your support by planting a tree in memory of Robert Grant.
Visit the Tribute Store

Share Your Memory of
Robert
Upload Your Memory View All Memories
Be the first to upload a memory!
Share A Memory
Plant a Tree