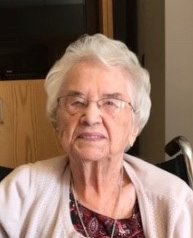 CLARKE EDITH CAVELL October 7, 1916 – July 28, 2020 Passed peacefully away in the presence of family members, on July 28, at the Long-Term Care Unit of the Bonne Bay Health Centre, Edith Cavell Clarke (nee Williams) of Norris Point, just a couple of months short of her 104th birthday. Predeceased by her parents, Nathaniel and Agnes Williams (nee Gould), of Pouch Cove, and by all her siblings: Charles (Julia, deceased); Irene (W. E. (Will) French, deceased); Clement (Lizzie); Madeline (Harry Barnes, deceased); Herbert (RAF WWII); Lillian (George Hudson, deceased); by her Brother-in -Law Cecil(Ruby, deceased), Sisters-in-Law Lucy (Louie Ship, deceased), Jane (Ken Tracey, deceased) and Edith; by her Brother-in-Law and Sister-in-Law, Clarence and Myra Laing of Norris Point; by Aunt Maude Clarke and Uncle Norman Parsons (Pop) who were like Parents-in-Law to her, and by her dear husband, Norman O. Clarke, in 1986. Left to mourn with loving memories are her four sons and their spouses: Herbert (Nora), Rowland (Gertie); Noel (Deanna) and Kevin (Moya); and their families: Dennis (Maria) and their children Grace, Campbell, and James; Gillian (Stephen Connors) and their son Colin; Fraser (Amy) and their children Avery, Sydney, Molly, and Ivy. Michael (Tracey) and their children Caellum and Aubree; James (Sonya) and their children Luke and William); Gary (Andrea) and their children Oliver and Simon. Shelly Bracey and her son Ben; Elizabeth and Oldric. Kerry, Kenny (Samantha) and their son Sawyer, and Anna. Also, her Sister-in-Law Lizzie Williams (Clem), still going strong at 103, her daughter-in-law Carol Osmond and many, many nieces, nephews, and friends, especially the Laing family, Brenda and Alden McGrath, her nephew, Reg Williams, all of Norris Point, and care workers, especially Lana Knott, who gave her much friendship and support over the years. Mom grew up in a close, loving and talented family of seven children in Pouch Cove. After earning her Grade XI and attending summer school for teachers at Memorial College, she taught for one year each at Harbour Deep in White Bay and at Pouch Cove before arriving in Norris Point in September 1938 to teach at the Anglican School. Here she was instrumental in the formation of the local Girl Guides troop, played the organ at church and at other functions for decades and taught music. She also had a small Browning box camera, and together, they were primarily responsible for many of the pictures we now have of Norris Point during the 1940s and 1950s. In 1942 she married Norman Clarke and Norris Point became her home for the next 8 decades. Here they raised their family, enjoyed sending them off to university and their visits home, eventually with spouses, children, grandchildren and great grandchildren. Mom enjoyed crochet and knitting to pass the time but her fun passions were Bingo and cards – especially Crib and 120’s, which she continued to play, enjoy, and demonstrate her expertise right up to a few months ago. She had a long, healthy and happy life and lived at home until she was 102 years old. Mom moved to the Bonne Bay Health Centre (LTC) in January 2019. The family is deeply thankful for the high quality of care, the kindness and support which she received from all members of the staff. Due to current COVID – 19 regulations there will be no visitation. A family funeral service will be held at St. Luke’s United Church, Norris Point, at 2 PM Saturday, August 1, with internment afterwards in the United Church Cemetery. As expressions of sympathy, in lieu of flowers, donations maybe made to St. Luke’s United Church, Norris Point, A0K 3V0. Funeral arrangements have been entrusted to Fillatre’s Funeral Home, Corner Brook, www.fillatre.ca
Services for Edith Clarke
There are no events scheduled. You can still show your support by sending flowers directly to the family, or planting a memorial tree in memory of Edith Clarke.
Visit the Tribute Store

Share Your Memory of
Edith
Upload Your Memory View All Memories
Be the first to upload a memory!
Share A Memory
Send Flowers